Quantitative methods of signal analysis are the basis to investigate the sleep EEG and to gain insights into sleep regulation. Spectral analysis is frequently applied in sleep research.

The sleep EEG is a non-stationary signal with typical changes as a function of the nonREM-REM sleep cycle. Figure 1 illustrates color-coded power spectra of an entire night. Spectral activity is modulated by the nonREM-REM sleep cycle. Slow-wave activity (SWA; power in the 0.75 - 4.5 Hz range), spindle frequency activity (SFA; 12 - 14 Hz), and alpha activity (8 - 12 Hz) in the first two nonREM sleep episode can be identified in the color plot by presence of warm colors.

Processes underlying sleep regulation are illustrated in Figure 2: 1) a homeostatic process responsible for the rise of sleep propensity during waking and its dissipation during sleep; 2) a circadian process that is basically independent of prior sleep and waking, and is responsible for the alternation of periods with high and low sleep propensity; and 3) an ultradian process occurring within the sleep episode representing the alternation of the two basic sleep states nonREM sleep and REM sleep. 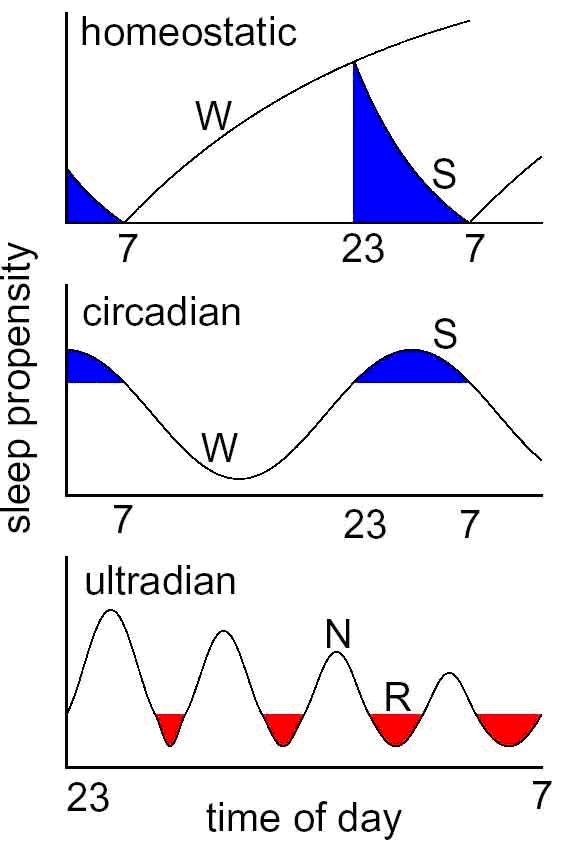 By specifying the processes involved in the regulation of sleep, models offer a conceptual framework for the analysis of existing and new experimental data. Various models, in particular the two-process model of sleep regulation, have inspired a considerable number of experiments that allowed to test specific predictions (for an overview see Achermann and Borbély, 2003; Borbély and Achermann, 2005). Recent advances in relating regulatory processes to specific brain mechanisms increase the attractiveness of the modeling approach.

Fig.3 Timing of sleep (black bars) and waking (white bars) results from the interaction of a homeostatic process S and a circadian process C (modulation of thresholds).

The two-process model of sleep regulation (Borbély, 1982; Daan et al., 1984) addresses the homeostatic and circadian aspects of sleep regulation. It assumes an interaction of its two constituent processes, the homeostatic Process S and the circadian Process C. The level of the sleep-wake-dependent Process S rises during waking and declines during sleep. Process C, which is independent of sleep and waking, modulates two thresholds which determine the onset and termination of a sleep episode, respectively (Fig. 3).

The time course of Process S can be derived from the changes of SWA which exhibits a global declining trend during sleep and whose level in the first nonREM sleep episode increases as a function of the duration of prior waking.