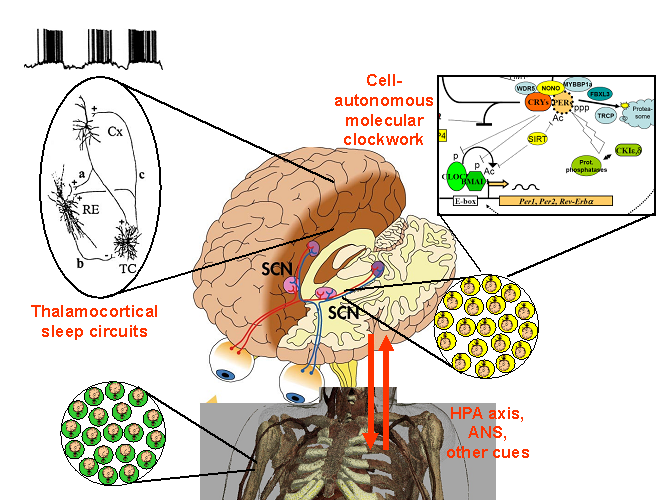 At a cellular level within the brain, sleep is characterized by widespread changes in neuronal synchrony, which in turn result in the electroencephalographic signatures by which it is characterized by researchers. Some of these changes are believed to be driven by a thalamocortical feedback loop resulting in synchronized changes in basal membrane potential and neuronal activity. However, the mechanisms regulating these feedback loops remain almost entirely unknown. At least two processes govern their intensity: a homeostatic one resulting in greater synchrony (and therefore “deeper sleep”) after increasing time awake, and a diurnal “circadian” one consolidating sleep preferentially during the night in humans.

Although sleep and diurnal behaviour are brain-centered processes, the signalling pathways so far identified as responsible for their function at a cellular level are conserved in nearly all tissues of the body and govern most aspects of human physiology. Disruptions in associated pathways have been linked to a broad spectrum of human pathologies, from depressive and affective disorders to cancer. In reverse, these disorders, as well as stress and infection, directly impair sleep and circadian function. In some cases like colorectal cancer, timed circadian therapy has been associated with significant improvement in therapeutic outcome (Innominato et al. 2012); and in others like depressive disorders, sleep deprivation or light therapy provides direct symptomatic relief (Dallaspezia and Benedetti 2010).

Nevertheless, even among different “normal” individuals large inter-individual differences exist in sleep amount and intensity, and in circadian clock period and phase, both genetically and due to environmental factors such as shiftwork. Physiological measurement of these properties is a laborious task, and the molecular mechanisms underlying their variation in human populations are mostly unknown.

Project 1: In vitro genetics and imaging of molecular signalling pathways important to sleep and circadian function